Life has a habit of circling us back into our past, taking us back to places from which, perhaps, we haven’t yet found what we were meant to discover.

Two years ago in April I first visited Abiquiu in northern New Mexico, introduced to it by a now former friend who has land here. It was a mystical experience I wrote about back then (posts here, here, and here). My soul felt rested here, making me wonder if this the place I should settle? Of course, since then, Covid-driven prices have made this area even more unaffordable than back then, so those thoughts are likely faded.

Now having circled back around these two plus years later and intending to spend a bit more than a week here, the land still makes me feel welcomed. As I sit here outside a quaint, vintage RV trailer I’m renting via airBNB, and staring into the distance at the layers of landscapes with different colors and tones, I’m left wondering why I’ve wandered back to this of all places when there are so many I’ve yet to visit.

We often, given the chance, lean to revisiting special places we’ve been. I wonder if it’s because we yearn to relive the good feeling those places gave us, or whether we’re sometimes more comfortable visiting the known rather than the unknown.

Certainly on this trip of now 32 days long, I’ve only stayed where I’ve never been until I arrived yesterday in Abiquiu. And before I’d been here 12 hours I’d decide to extend my stay from four days/nights to eight. It’s not that I’m lured to see more of the area, having deeply explored the area back in 2019, but there seems to be another reason.

I decided to stay because it’s a place I feel slowed down, connected, and one that stirs my creative juices. And so I reasoned that since I haven’t been writing as I’d planned to do on this trip, plus being way behind on YouTube videos (I have a mountain of video taken in the four national parks I’ve visited since the last post video on the channel), what better place to park it, give Obie a rest, and spend some serious days in creative mode.

PS: This is the first chance I’ve had to learn to fly the drone I bought for this trip! All the time before now I’ve been staying on one for or another of federal land where drones are forbidden. Outside of that, I could have used a few Walmarts I overnighted at, but at those places I like to be as stealthy as possible and a drone would definitely draw attention. Anyway, above short clip of the first test flight! More to come.

It finally dawned on me today (during driving of course) just how many miles and hours I’ve spent simply driving and enjoying the country. And varied country it’s been: from the wooded Upper Peninsula of Michigan to the grassy plains of the Dakotas, from the stark landscape of the badlands to the gorgeous mountainous west Montana and eastern Idaho. And today the long drive included the dry, desolate (not if you count the tourists/vacationeers in cars) stunning geography of Utah going into the Moab area.

Fact is, I like to drive. Guess I got that from my Dad who seemed to love nothing more than long drives on family vacations. I have memories as a kid of being ushered into the back seat with pillow and blankets before dawn so Dad could hit the road and start driving his 12+ hour day, traveling to some distant relative’s house.

I’m speculating though that the long, sequestered 18 months we’ve all been under has something to do with what is feeling like release and rejuvenation therapy on this experimental camping trip of 60 days. Almost half way there and I’ve passed 5,000 miles already while wandering through seven states (see the map here). The trip’s been all the more enjoyable since I’m venturing into states I’ve never been, and that adds to the wonder.

While I’ve enjoyed the times I’ve camped in one place more than a few days, there’s an undeniable itch each time to get back on the road and see more of America. Who knows: maybe I’m concerned another shutdown’s coming and I want to see as much as possible now. Whatever the reason, it’s been a blast so far.

Park workers spent a lot of time at the entrance gate to Teddy Roosevelt National Park warning me about the rattlesnakes. Statistics of encounter probabilities suggest they should definitely mention the other, more probable park hazard: buffalo shit.

Ah yes, but it’s royal shit since buffalos were brought back from near extinction and have more liberties and freedoms in the park than visitors.

Number of rattlesnakes I’ve seen in my five days here so far? Zero.

Number of buffalo pies? Too many to count. I rest my case.

Last night a large herd wandered through the campground, and I mean through everything: individual sites, the roads, around the pit toilets, loitering around the drinking water tap, blocking doors on RVs, you name it. All of us had to leave our tents and find places at a safe distance to observe this amazing interaction. No vehicles could move, and in essence, this heard of probably 60 buffalo shut down the camp for close to an hour.

Common thing here, and there are stories of campers injured by getting too close or spooking the herd (my observation is you’d have to do something unusual to spook them; seemingly so docile and indifferent to us around them). In one case, a spooked buffalo caught a tent line and dragged the poor camper inside to what seemed to them like forever but probably only seconds. He escaped with scrapes and bruises, and of course, a story to tell the rest of his life.

No one complained. Fascinating to watch up close these large plains beasts meander around, seemingly unaware there were people or roads or cars. Didn’t matter: they roamed wherever they liked.

There’s definitely some intentional behaviors in the herd, notably the snorting of bellowing of the males, esp. the larger ones. Hard to say whether this is a reminder to other males, instructions to the herd, who knows.

The big ones also love to paw in the dirt then fall over and roll around in the dirt. Repeatedly. Have some video of this going up on the YouTube channel when I can get through the 100+ videos I’ve taken so far!

Yesterday on my earlier drive out of the North unit to spend the day exploring the South unit, I encountered the morning herd commute across the road from the campground to the entrance. In one spot, a particular majestic large male stood stock still in the middle of the two-lane highway, blocking any car from going by for at least five minutes. I was at the front of the line about 15’ from him and enjoyed watching him. He could care less about us and who knows what was going through his mind. Plans for the day? That svelte female buffalo he’d been flirting with? Which meadow to have breakfast in?

Eventually he wandered off the road at a snail’s pace. Luckily, it was a lone male and not the herd in the road! Not uncommon to be stuck waiting for a going-nowhere-in-a-hurry herd to clear the road.

Stay tuned for the extended video on my YouTube channel of the park and lots of buffalo coverage.

“Go west young man,” Horace Greeley once said. I think ol’ Horace forgot to add this caveat: except in the summer, and the modern interpretation: especially in 2021.

My July-August travel plans had me heading west through the northern states, but the record heat is changing my path. Can’t avoid some of it, else I might as well head back home! So I’ve modified a path that loops into some of the west then heads south into the Rockies: where I’m told, by some campers here, it’s nearly just as hot at the higher elevations (but cools way down at night).

So it’s acceptance time and make the best of it.

Daily routine here at Teddy Roosevelt National Park (North) is to scramble in the morning with anything needing fussing with, do my yoga, meditation, good breakfast, early ‘net readings, etc., while it’s cooler. The day then becomes managing oneself from shaded, breezy spot to another, along with of course, copious amounts of water. I use plain coconut water as a an electrolyte replenisher at the end of the day instead of Gatorade. But let their be no confusion: when it’s this hot, and you’re living outside, the heat tells you what you’ll do during the day (or more pointedly, what you won’t do).

I had planned to so some extensive hiking. But, well, it’s too bloody hot to pull that off, as much because I don’t enjoy hiking while lugging a gallon of water along plus I tend to stay entranced by the hike and easily go past my point of heat stress. But occasionally I’m going in the middle of the day to drive somewhere for supplies and scenery and that helps charge the lithium portable batteries (plus the promised treat of the car’s Max A/C button!).

Still, managing to find time to write and wander a bit. Here at the Teddy Roosevelt National Park north unit I have commandeered this 1920s CCC-built pavilion of sorts to hang out in and write. Amazingly, it’s always shady underneath the expansive roof held up by full-trunk timbers. It’s also a great spot to await the buffalo herds that move through the meadow between this pavilion and my camp. Have yet to capture usable footage for YouTube, but they’re all over the place so just a matter of time. The two times they’ve been through this meadow I wasn’t in the pavilion, thus too far away (but so awesome to watch through binoculars).

Despite the dehydrating heat, I’m enjoying the benefits of camping in one place for a week. Usually I do shorter stays of one to two days. At that length it’s a hassle to set up full camp, so it’s been a treat to avoid that and just live in the wild (if campsites with good toilets, trash service, and clean potable water qualifies as “living in the wild”).

This map shows where Obie and I have wandered. Click image, then SHOW MAP after the jump. 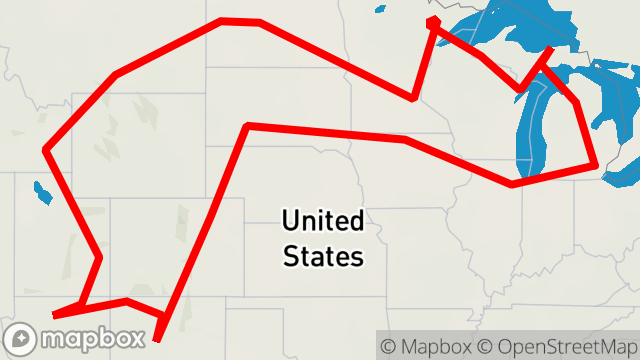