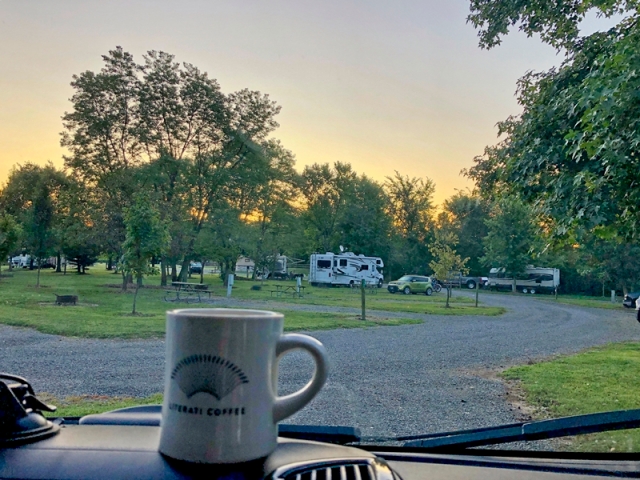 One of the more pleasant solitary acts, whether at home or living nomadically, is rising early before the dawn, fixing a cup of fresh coffee, then sitting back to await the sunrise and the promise of a new day. The stillness and quiet of this moment is pure joy.

Success, I once heard someone say, is waking up still above the ground each day. A bit morbid, but to the point that each day we greet is a personal success, so why not salute the orange orb in the sky as it peeks out through the trees in its ascent to warm and light our world?

Alone one is never lonely: the spirit adventures, waking
In a quiet garden, in a cool house, abiding single there;
…
There is no place more intimate than the spirit alone:
It finds a lovely certainty in the evening and the morning.

Among the first questions people ask when learning I’m a solo nomadic is “Don’t you get lonely?” or “How do you cope with loneliness?”

Truth is, I only think about these concepts when someone asks about them, so for me it’s a “no” to both questions. To understand my response, you need to know I’m a natural introvert who’s learned to be an extrovert on demand. When interactions overload the senses, then I need space and quiet to reflect and think, to be alone.

For someone like me, solo traveling in my RV is an ideal lifestyle, one where I can occasionally enjoy face-to-face socializing yet on the whole, have plenty of alone time to reflect, to write, to think. When living in a city, this seemed only possible when retreating inside of a house’s four walls. In my rolling RV home, I can move on down the road or find a secluded camp site in nature and spend hours or days in solitude.

Probably the least understood need by introverts is for time alone. Often judged as unsociable or unfriendly, it’s really how we recharge our batteries so we can endure (and mostly enjoy) encounters and interactions with others. One good example happens during Travato meet ups (a three+ day get together of Travatos anywhere from six vans to a hundred or more), the Travato tribe accepts it if one occasionally retreats to the van for several hours versus hanging out constantly around the fire, on the porch, or wherever the active social circle. This behavior, at least in my experience, is not as accepted in the business world, thus the need for introverts to develop the ability to toggle extrovert mode on demand, akin to role playing or method acting I suppose.

The reality of today’s connected world means none of us are truly alone. Most introverts I know, including myself, engage in online conversations and those seem to exist in our introverted worlds somewhere between in-person socializing and being alone: not as potentially draining as being with people, yet not as isolated as solitude when there’s no internet connection.

But here’s the part some people struggle to see as positive about introverts traveling solo: you are the only decider on where to go, stay, see, or do. As the old saying goes, you are both chief and head bottle washer: decisions and how to spend time are all yours (for good or bad!). Traveling with a companion is more about ongoing compromises and there’s nothing wrong with that if one needs that constant companionship.

So when others ask these questions, I smile and say “Not really,” when I’m actually thinking “How could I be, when I go and do where and what I want and have all this nature around me to commune in introspection and quiet solitude.” As Sarton said, being alone is never lonely for those that embrace a free spirit.

My absence from posting here has not been for lack of stories to share, but from being immersed in another round of mods (owner-made modifications) to Tamasté and a friend’s Travato. After my stent recovery time in Ohio and Michigan, I traveled east to Maine, expecting to eventually travel New England and around Canada’s eastern shores and islands.

I’ve been staying at a friend’s house in Maine atop a high hill with a breathtaking views of distant mountains across the horizon. Despite the ever-present bugs (that’s Maine in the summer) it’s a beautiful place to spend some time and focus on making a final (right!) sweeping round of mods for efficiency and finally achieving an ideal (for me) writing space inside Tamasté.

Aside from the modification work, this area of Maine with its quaint towns and rolling, lushly treed landscape feels apart from the noise going on in the country and world. Having live lobster readily available is not a bad perk either, and the local town’s Maine culture and ways enjoyable to experience.

The culmination of my time here is my friend’s annual Travato meet-up going on this weekend, a gathering of 20 Travatos from around the country. One of the interesting things about Travato van life is the Travato Tribe who are sociable in packs. Such meet-ups are how this culture of like-minded (at least relative to Travatos and van life) folks to get together, share food and stories from the road.

While I hope to spend the next two months traveling New England and Canada, I’m still uncertain where I want to winter this year: Florida (like last year), or perhaps the Southwest (Arizona/New Mexico). What is certain is 2020 is my year to explore the Western U.S. states and coast. Looking forward to the sunshine and amazing geography across America’s vast west.

Based on the last 90 days or so, I’m hard pressed to call myself a full-time, nomadic traveler. The vast majority of those 90 days were staying with friends, visiting my sons in Hawaii, plus the near-four-week unplanned health procedure “adventure” and recovery. If Tamasté had been my dog, I’m not sure he would have known who I was when I pulled him out of storage yesterday morning to get back to the ways of the nomadic wanderer, RV-style.

But here I am, day two of finally getting back in the thick of rolling the roads and seeing the country. Last night I stayed in the driveway of Travato tribe friends outside Buffalo, NY, and tonight on top of a hill in New Hampshire in the driveway of more Travato tribe friends. And tomorrow I’ll hit Maine where I’ll base for the next few months+ while I explore New England and up into Canada.

I tend to hold personal things close and share only with a few close friends or family. The following experience is not intended to elicit emotional responses, nor support, but shared because it explains the original, subconscious reason why I’m wandering around in Tamasté, and how that’s now changed. And without sharing, the larger point would not be as relevant or crystal clear.

Over the past few weeks I’ve been in my former home town of Findlay, Ohio, for various healthcare appointments and get my checkmarks so I can head off down the road for another year. During one of these, an office test showed a potential problem, and a subsequent hospital-based test confirmed it, leading to a heart procedure to fix it. That turned out to be a proactive avoidance of something that could have been bad possibly sooner than later.

Immediately after the test, however, was an event that led to my second chance and an “I get it” moment around phrases such as live each day, tomorrow is not promised, etc.

Truth is, in some ways, we are the biggest barrier to our health, well-being, and a long life lived without too much strife. We do things that defy common sense, accelerate body issues not so much out of ignorance, but from ego, a sense of entitlement and from the naïveté that “it won’t happen to me.” All of these in the face of evidence that says otherwise coupled with our profound lack of self will. Yes, sometimes genetics plays a part, but I suspect it’s mostly a lifelong act of obstinance to doing what’s right to keep our amazing bodies functioning as designed.

My stated reason for traveling in Tamasté upon retiring was I wanted to see places long on my list, visit old friends, spend more time in nature, and dedicate some real bulk time to writing. Truth is it took some deep, reflective thought and journaling since this second chance event to truly understand. I have been scrambling to see and do things that I didn’t have time for when I did have a job, bills to pay, and things to buy. And, as it turns out, this rush to do is fueled by a hidden fear that mortality’s time clock has only so many tick-tocks left. It’s ludicrous, in a sense, to think I could possibly pack decades and decades of missed experiences into such a short time, yet I that apparently was my intent while I outwardly thought I had lots of time left.

Most of us probably have some type of fear about passing on yet intellectual know we only live in these bodies so long. But knowing the logic of that and brushing up against it are decidedly different emotional moments. Oddly enough, at the time, I was not fearful but attentive on the experience that was unfolding before me. Only later after reflection and more understanding did I grasp the potential closeness of that event.

I’ve always thought, probably like most of us, that those pithy quotes and statements have truth, but there’s lots of time left so no worries. Like many such sentiments, they tend to touch and influence only those who’ve already brushed with consequences of not following such sage advice, and tend to not inspire change for those who need to change the most.

So where and what now? I continue on a path of reexamining what I’m doing and what matters, but so far I’ll continue wandering and exploring in Tamasté for the near future. One change is I have no plans beyond the short term nor feel in a hurry to see and explore places and things on that huge list. Instead, it’s a gratitude each day to have the opportunity to be free and nomadic for now so I can explore, enjoy, and experience whatever comes my way each day. Enjoying what’s in front of me, right now, is suddenly far more important. 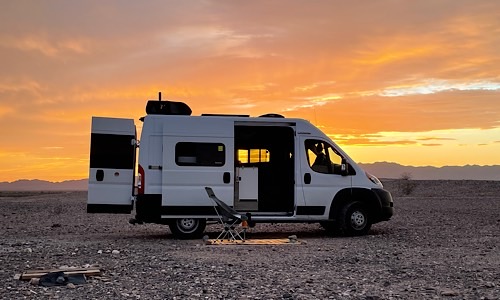