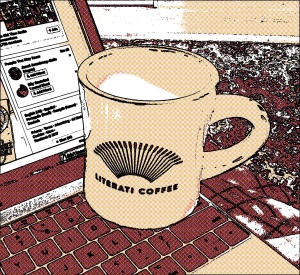 These days I rise early. It’s not just eagerness to get into my morning creative zone; some credit must go to that arc of life eventually making us all morning people.

Most mornings after shutting off the alarm, I try to get to my desk and begin writing relatively quickly. In between there’s making the bed, getting dressed (despite jammies and bathrobe being an allowable fashion these days, I try to dress as if going work, which I am), grabbing a bite of breakfast, and that royal reward of morning coffee.

My morning coffee ritual is different than when making a cup after lunch. You’d think this early I’d be in a hurry to make and drink it, but just the opposite. While my senses are not fully active yet, it’s my moment to catch my thoughts and ease into the day. Besides, I have to give some time for the inevitable internal squabble between mind and body to settle over whose dumb idea it was to get up this early.

The beginning is autonomic: pull out the coffeemaker, position it on the counter, plug it in, fill the water reservoir. From there, however, the art of the ritual begins. Some morning it’s about selecting and grinding the beans, other mornings it’s deciding which grounds to use. Either way, the careful laying in of filter, adding grounds, and turning on the machine begins moments of mindfulness as the magic machine makes my brew.

As I start the machine, I listen to its familiar sounds: waking the heating element, heating the water, activating the pump to flow the boiling water over the grounds. There’s always that pregnant pause as the machine goes silent before it delivers a precise, thin stream into my waiting cup. And as I watch mesmerized most mornings, this steady, clear stream slowly changes into a dark, rich brown.

Soon I’m rewarded with a cup of steaming, slightly creamed coffee. From there I sit, sip, and let my mind wander and ponder on the possibilities of the day before me. And when I can see the full inside bottom of the cup, it’s time to go to work.