Every state has parks that are well known and visited. Then there are the more obscure parks that don’t get the limelight. Yet, they can hold hidden gems.

Stayed two nights in the hilly piney woods of East Texas, specifically at the northern end of the Davy Crockett National Forest at the Mission Tejas State Park. I lived in Texas for over 35 years and frequented many of those big named parks, and never heard of this one or the Fort Parker State Park I stayed before here for three nights previous. I missed out on a lot of nice, less-populated state parks during those years in Texas.

From the park’s history brochure: “The park was built in 1934 by Company 888 of the Civilian Conservation Corps as a commemorative representation of Mission San Francisco de los Tejas, the first Spanish mission in the province of Texas, which was established in 1690.”

The campsites here are tight and hilly, so a bit challenging backing into them. At least I don’t have the trouble these big trailers all around me had. Score another point for Travato’s ease and nimbleness!

Today’s highlight was a meandering, long hike through the park’s piney hills and valleys. For those used to trail hikes at state parks, you know the gamble whether trail maps they hand out are reasonably accurate or not. Some are, while others like this park’s seemed drawn from someone’s memory, rather than reflecting reality. At one point about half way on the three-mile hike (overall probably more like four miles counting verticals since the park has a vertical elevation change of over 400′), and even five or more miles counting the actual route versus the trail map’s fantasy route. In places, the path went left when the map showed right, or ran straight when in fact it zig-zagged down into a valley. I gave up reconnoitering via the map and just followed the path. There’s a Zen-like life statement in that last sentence I’m sure.

I stopped many times to listen to the quiet and the occasional bird and wind rustling and scattering the fallen leaves on the path. I tried to imagine what it must have been like back when the mission was active and the local Hasinai Indians roamed the woods. No doubt it looked as I was seeing it, without the paths constructed by park crews through the years. But even some of those, essentially fallen leaf-covered narrow foot paths, might have existed as natural animal and Indian paths through the woods.

12,000 steps later I was back at the replica mission house where I started, trusting the path I was on would lead me home. Today that home was Tamasté and the anticipation of tonight’s dinner: camp stove pan-grilled peppers and chicken strips, companioned by chilled red wine as the stars begin to come out overhead. 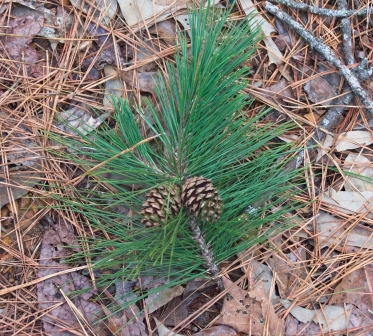 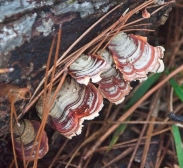 Thought this was a deer blind…until I saw the plague inside: bird watching blind built by Eagle Scouts.