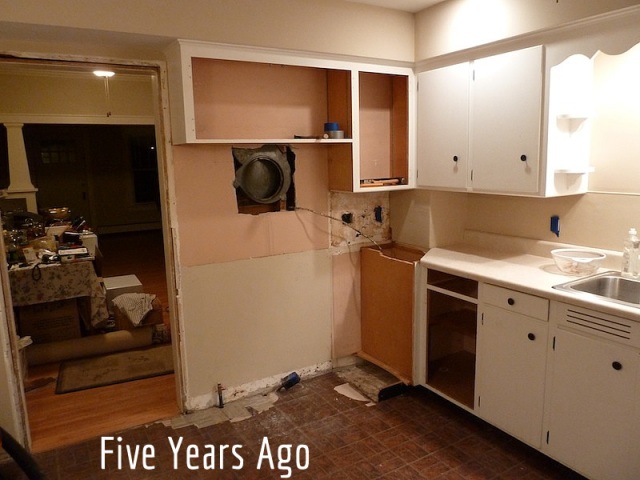 The coming of spring brings anticipation for more pleasant activities than those of the frigid winter: gardening, green things, walking without 10 lbs of clothing…and time for the annual list of things to fix up in the old house!

I bought my 1920s bungalow six years ago with the naive thought “I’ll have this place fixed up six months…one year tops.” Six YEARS later and I’m…close!

As with all old house remodeling, and those who have done this before know this well (while those who haven’t should pay attention), you can plan all you want but the house goes by its own plans. Serendipity and surprise go hand in hand when thinking “I’ll just tear out this wall and put in a bigger closet door!” The simple notion of “tearing out” doesn’t really do justice to discovery, adaptation, and the ensuing requisite six trips to the local hardware/building store during said tear out. But, with patience (and a healthy stock of band-aids), things do get accomplished, even if not exactly as planned.

This year’s much-anticipated remodel falls to that holy grail of comfort for an old house: removing the old hot water heating boiler and installing central air and heat. Life after this year’s effort will be far more comfortable, although nothing beats the heat of the old boiler systems: constant, simple, quiet (excluding the comforting creaks and groans of pipe expansions). But time and toil wears everything down and this old boiler is now below 40% efficiency, so time to move it to the old boiler’s rest home down the street.

As always when remodeling an old house, one action causes two, which in turn causes four, which– you get the idea. The new HVAC will, in order of fun, result in 1) moving a LOT of furniture in the house to gain access to remove the baseboard radiators and install grilles, 2) moving all sorts of crap around in the basement to make room for the new furnace, 3) require wall and baseboard repairs and paint where the old baseboard strips were, 4) domino into new flooring in the two rooms with carpet and linoleum (you think the original flooring installers neatly installed those all the way to the walls under the baseboard radiators?), and 5) an unknown delight. There’s always an unknown delight when working on an old house. Always.

When it’s all done (by end of May!) the summer should be far more pleasant and the utility bills far lower. Definite win-win, but I’m running out of house remodel projects after this big one. Not that that’s a bad thing, I just won’t know how to act if something major’s not in flux each year in this old house.