On our annual bud trip, my boys and I drove up into Canada to visit Niagara Falls from the Canadian side, plus a day trip to Toronto. In our usual pre-trip conversations about where we’d like to go, I offered to take them to New York City, or San Fransisco, thinking I would expose them to some serious culture and a taste of big city life. They, to my surprise, wanted to see Niagara Falls instead! At the time I thought, “Great, this will save me a bundle,” which didn’t prove to be exactly true, but close.

I’d seen Niagara Falls once before from the U.S. side, when I was 10. I remember the roar of the water and being impressed by the size of the thing, but not much more. Since then, more than one person remarked that the Falls were more spectacular from the Canadian side. So we three decided to spend all our time on the Canadian side to see what all the fuss was about.

Upon arriving in the Niagara area, the first impression is the obvious expectation that no tourist dollar brought in will ever leave the area. Everything is maximized for tourist pleasures from elevated restaurant prices to entertainment of every kind one can imagine. I couldn’t help but wonder if people came here to see the Falls, or partake of the pleasures of the wax museum, the arcades, movie houses, night clubs, stage shows, major-name concerts, casinos, and on and on. I guess after 30 minutes staring at falling water, most tourists need something else to do. Fortunately, we were intent on absorbing the Falls and avoided all those other money traps.

The two tourist events that got our converted American dollars were the Maid of the Mist boat ride that takes the passengers, rain parkas and all, close alongside the American Falls then even closer to the Canadian Falls, and the Behind the Falls attraction. Fairly recent rock falls make the American Falls less than pristine but still majestic. The Canadian Falls are bigger and more impressive, but a good portion of them are constantly covered by a mist cloud created by the falling water. Still, impressive examples of Mother Nature’s forces at work.

On the Behind the Falls attraction, one descends by elevator down to a viewing platform so close to the edge of the Canadian Falls you’d think you could reach out and touch them. Additionally, you can walk behind the falls and see the power and surge through a couple of excavated viewing tunnels. Don’t really see anything but a misty white wall of water, but you can feel and hear the power of the falls. 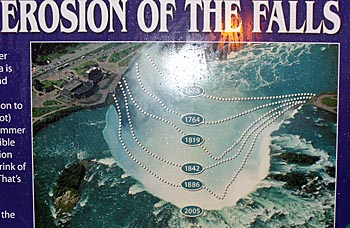 The most intriguing new-to-me fact came from this wall poster in the Behind the Falls tunnel. At some point in the early 1700s, surveyors begin charting the shape of the Canadian Falls and since then subsequent engineers keep the monitoring efforts revealing the alarming rate the fall was receding. Through engineered control of upstream currents over the last 80+ years, they’ve been able to slow the erosion to a level that ensures the Falls will be there for future generations to enjoy.

Even though it either rained or stayed overcast the whole visit, the Falls were impressive enough to overcome the weather. My photographs came out okay, but clear, sunny skies would have yielded some amazing blues and greens in the water. Tourist traps aside, visiting the Falls from the Canadian side was well worth it. 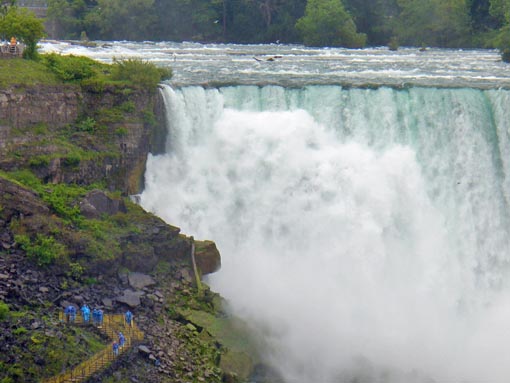 American Falls, viewing walkways on the east side. 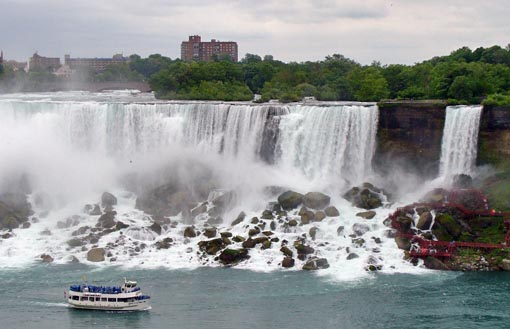 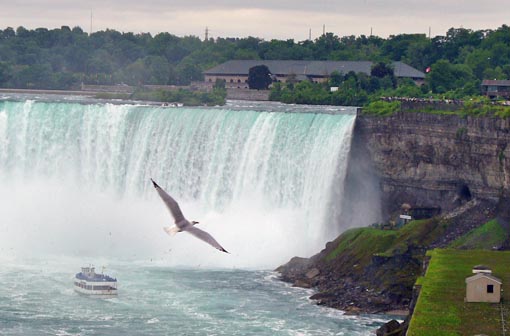 Canadian Falls, Maid of the Mist boat, and one serendipitous bird shot! 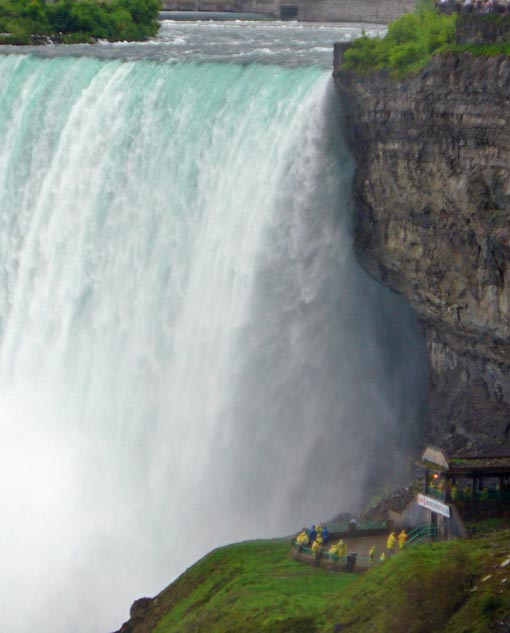 Behind the Falls attraction, Canadian Falls