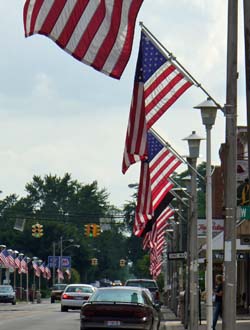 Flags still wave in small town America, five years past a time when our future seemed unclear. Like the moon landing and JFK assasination, 9/11 is a defining American moment remembered with marked clarity:  exactly where, with whom, and what each of us was doing. Five years ago as I was taking my then-companion to downtown Houston, we heard the first fact-thin radio report of a plane impacting a World Trade Tower. We paid little attention initially, only later reacting to those horrid details with an inability to do much of anything. Morbid fascination turned to an uneasiness about the safety of my companion and would I be able to pick her up? Were the kids safe at school? I would rather not remember that horrible “Would we be next?” feeling, but it seemed real at the time. Days following the tragedy were simply blurs of unproductivity. We settled back into routine eventually, and whether from patriotic defiance to “not let them win” or desperate to regain the status quo, back to work we went in search of a lost normalacy.

In the five years since, my life has changed in many ways:  I left one relationship that wasn’t the right path to one I think is; overcame a year in which a physical issue nearly put me in the poorhouse if not for a skilled back surgeon’s hands; and in spite of (or to spite) the terrorists I’ve flown more in the last five years than the 15 years before. We all heal in different ways from tragedy, and while my growth during these five years relates to 9/11 only chronologically, the same spirit of survival reawakened in America pushed me through my own personal miasmas.

The media states we live in a “not if, but when” predictive world. I for one won’t live looking over my shoulder in waiting, prefering to trust that whatever happens we’ll deal with it and persevere. The world is different now than it was five years ago. And even though I don’t agree with our approach to fighting this difficult enemy, I do believe our American spirit will survive whatever comes to pass.