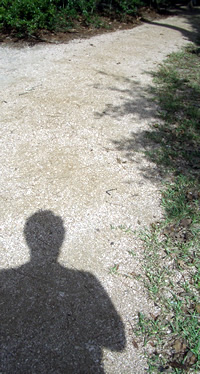 One important aspect of digi-blogging has to be trying to remain totally incognito whenever possible, or at least stealthy enough to avoid detection. People may love to talk about themselves, but capturing their “souls” on camera is another matter. Primitive tribes encountering well-intentioned explorers would balk about having their picture taken, thinking the camera captured their “soul.” So it’s little wonder some people take umbrage when you look at them through the camera’s lens.

But sometimes, despite one’s best intentions, the shadow gives us away. Like Lamont Cranston’s1 infamous shadow that “only” knows, our shadows portend our every actions, and make it tough (at least on sunny days!) to sneak up on unsuspecting photo subjects, even the inanimate ones. On many occasions I balked at taking a picture because my shadow or other object’s shadows were in the way, ruining an otherwise interesting shot. But in these two instances, the shadows told the story better than the objects taken. A shadow on my path of life could be spun positively to say, “Hey, I’m alive,” or one could take the negative like the dark, foreboding novel Something Wicked This Way Comes.2

Shadows don’t have the best reputations ranging in usage from a dubious attribute (a shadowy character) to something less than before (a shadow of his former self) to a menacing possibility (evil lurks in the shadows). And what child hasn’t spent formative time trying to chase, then catch, their own elusive shadow? Helen Keller once said, “Keep your face to the sunshine and you cannot see the shadow.”…an interesting observation from one who was sightless. No doubt she meant if we focus on the good things in life we’ll avoid the dark, questionable, possibly negative, things in life. Either that, or maybe she was saying to only go out on cloudy days…just to be safe from indecision and temptation.

> “Character is like a tree and reputation like its shadow. The shadow is what we think of it; the tree is the real thing.” – Abraham Lincoln (1809 – 1865), Lincoln’s Own Stories

1. Lamont Cranston’s alter ego, The Shadow, was the hero (or anti-hero) of a long-running network radio show and pulp magazine (1930s-1950s).
2. Ray Bradbury’s novel about two boys’ experiences at a mysterious and sinister carnival run by one Mr. Dark; also a line from Shakespeare’s play Macbeth.